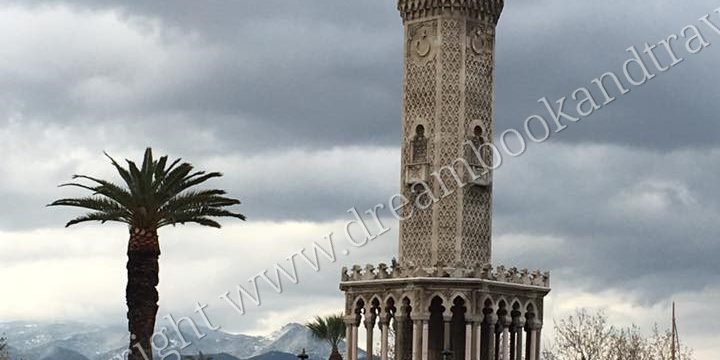 It is our third morning of our Izmir New Year’s Eve stay and the first day without rain. The sky is finally clear, after two foggy days, allowing the sun to hide and seek patches of light blue on its watery green background.

From the window of our seafront room, I have for the first time a panoramic view of the gulf that has seen 4000 years of history and habitation. Of the same age as Troy and a rival of ancient Pergamum, the previously known Smyrna has developed and grown along the shores of this beautiful gulf, facing series of fire and destruction, finally culminating in a vibrant entity that is Turkey’s second port and third biggest city.

It snowed during the night, and the sea has turned petrol-green, with lighter patches clearly visible as it unfolds, quietly, in front of the city. In the distance, newly built districts cover the mountains protecting the bay, the tops of which are still white with snow. I am told a similar view one gets from the top of the 100-year-old Tarihi Asansör, still in use and a landmark of the city. However, we are happy with our current location that provides ever-renewed impressions of the sea and the land on the other side of the gulf.

During the rainy days the sea was black, the wind strong and one felt cold to the bones before any successful attempt to conquer the seafront. On such days there is still plenty to do in Izmir, like a shopping expedition on the Mithatpasa Caddesi, followed by a cup of salep in any of the seafront cafes in the area, or an even more comfortable, but not as authentic, experience in one of the city’s shopping centers (Forum Bornova, Park Bornova, Agora Center). For the culturally inclined ones, the Ethnographic and Archeological Museums are definitely worth a visit, as well as the Ataturk Museum. As the thick, tangible, fog had lifted I finally distinguish in the distance the Folkart towers, the 5th highest twin towers in Europe, and we decide it is time to bundle up and explore.

An Izmir New Year’s Eve – the city unfolds its treasures

We get off the Metro in Konak square. My first view is of the peaceful, immobile, old guy selling corn as bird food, who is probably freezing sitting for hours in the thin wind that penetrates one’s every fiber. I would not have dared to go out myself unless armed with a couple of glasses of Turkish Çay at breakfast. We are still courageous so we enjoy the view over the gulf from the waterfront at the Konak Pier, before turning our attention to the iconic square with the Clock Tower, pigeons, Governor’s Mansion, and City Hall.

We spot a simit (gevrek, in Izmir) vendor and cannot resist the temptation. While I savor the tender fresh dough, I take in the holiday atmosphere of the square. It is almost New Year’s Eve, and people hurry past palm trees and unusually bloomed bougainvillea, in a rush to buy not only supplies for the festive dinner but also presents, Christmas tree decorations, lottery tickets and flowers from street vendors, as well as red underwear for good luck. These preparations feel like New Year, Christmas, and Valentine’s Day wrapped in one and they remind me of the Romanian 1st and 8th of March celebrations. I suddenly feel exhilarated and alive as part of the crowd, and I almost miss the beautifully tiled octagonal Yali Mosque in the corner of the square. I try to quickly peek inside before we move on to find our way to the Agora through the Kemaralti bazaar.

As we enter the colorful labyrinth of shops, coffee houses, artisan’s workshops, mosques, synagogues, caravanseries, and hidden courtyards, we realize this is where our day’s journey would end, in order to do justice to such an amazing and authentic place. As we tour and shop along, my eyes catch glimpses of the ancient Mount Pagos on top of which still reigns the Velvet Castle (Kadifekale), offering an array of Roman and Byzantine architectural remains, as well as unique views over the bay at every turn.

As we finally make our way towards the Agora through the Havra Sokagi, I let myself carried away in amazement at the fresh produce and fish vendors who make their offers in loud voices in a competition of not who has the best merchandise or price, but who is the best orator. The smell of fried fish suddenly reminds us that we are hungry, as several hours have passed since our last simit. We step aside from the main street at an improvised restaurant seating a couple of plastic tables and serving from a small kitchen. Apparently, this is the best place in town, as men in suits enjoy their late lunch at tables nearby. We make our order of fish sandwich and watch it being prepared in front of us. Çay is not on the menu, but the waiter is quick to provide it from a nearby tavern, and I get another example of the hospitality and customer-oriented trading abilities of the Turkish people, who always delight in welcoming their guests and tourists.

After lunch, we explore the Agora before coming back through the narrow streets of the bazaar and making sure to reserve plenty of time for the Kızlarağası Han, which features remarkable jewelry and Izmir textiles shops, as well as masterfully restored architectural features. All shopkeepers are happy to provide information about their merchandise and talk to you at length, so when the call of the muezzin from the nearby mosque blocks one artery of the Han with men knelt in prayer, we enter a small shop that features a comfortable sofa and ask for Çay. I buy a hand-bound notebook and I sit down and write my impressions of a long and unforgettable day. Before we head home, we stop at the famous Kemeralti Borekcisi for a dinner of Börek variations in the warm atmosphere of a family-run restaurant.

An Izmir New Year’s Eve – the glitter and the gun

The next day we wake up to the blue and indigo see spoiling itself lazily under assertive sun rays, and an almost clear blue sky. The air is crisp, but the all-encompassing joy of the last day of the year brings plenty of people in the streets and the rush from the previous days pales in comparison to the bustling activity of the city today.

I find great joy in spotting corners of quiet Mediterranean beauty in the midst of this busy day – beautifully restored wooden houses (yalis), citrus trees packed with fruit, palm trees, bloomed bougainvillea. We decide to spend the day in Alsancak, Izmir’s posh and youthful quarter. We arrive at the Alsancak Pier, close to the Kordon. Along this seaside promenade, one can stroll at length and enjoy unique views of the city and the sea at various times of the day. Just across the street, an array of great coffee houses and restaurants make this the perfect venue for the beginning and the end of a day spent exploring the district. We walk along pedestrian streets with tastefully restored houses, some of which are clubs and restaurants featuring festive decorations and advertising New Year’s entertainment programs with music and dance. We stroll through some of the designer outlets and western brands shops and finally stop for coffee and cake at the famous Reyhan Café on Dr. M Enver Bey Caddesi, a delightful broad boulevard that reminds us of Nice. Although there are several restaurants in the area that come highly recommended, we prefer to settle in the end for a light snack of either Izmir midye or Kumru, both of which remind us of summers spent in nearby Çeşme and Alaçatı.

As it is the New Year’s Eve, we resolve to visit Izmir again soon. The city is not only a great weekend destination but also the biggest transport hub in the area and thus an ideal base for short trips along the Aegean Coast of Turkey. In the summer, we would spend a few days swimming in Çeşme, enjoying the nightlife and handicraft shops in Alaçatı, driving along the coast to Karaburun to eat at one of the authentic seaside fish restaurants, or taking a day trip to the Greek island Chios. The ruins of Ancient Ephesus are only 80 km away from Izmir, and from there it is only a half-hour ride to the popular seaside resort of Kuşadası. From there, the adventure could continue either south, to explore Ancient Miletus and Lake Bafa Nature Park, or East towards Ancient Hierapolis and Pamukkale’s famous travertine terraces. The number one on my list is a trip 100 km North of Izmir to Ancient Pergamum (Bergama), with a stop on the way back in the less touristic city of Manisa. Almost completely destroyed by the Greek army as they retreated in 1922, Manisa offers itself to visitors as a welcomed change from the many visits to ruins of ancient towns.

With this in mind, we finally head back to celebrate the passage of the New Year together with our family. We listen deep into the night to the sounds of people partying at restaurants by the seaside and we are happy to hear on TV about street celebrations going on in Taksim square in Istanbul despite the rain and in Kızılay in Ankara. It is a New Year and we fall asleep hopeful and happy, thankful to have spent the last days of 2016 in an amazing city that has so much to offer.

Only a few hours later, on the 1st January 2017, we wake up to the news of the latest Istanbul attacks. We feel again hopeless and sad, and as news of the car bomb attack in Izmir runs shivers through our veins on the 5th of January, three days after our visit, any more words become superfluous…