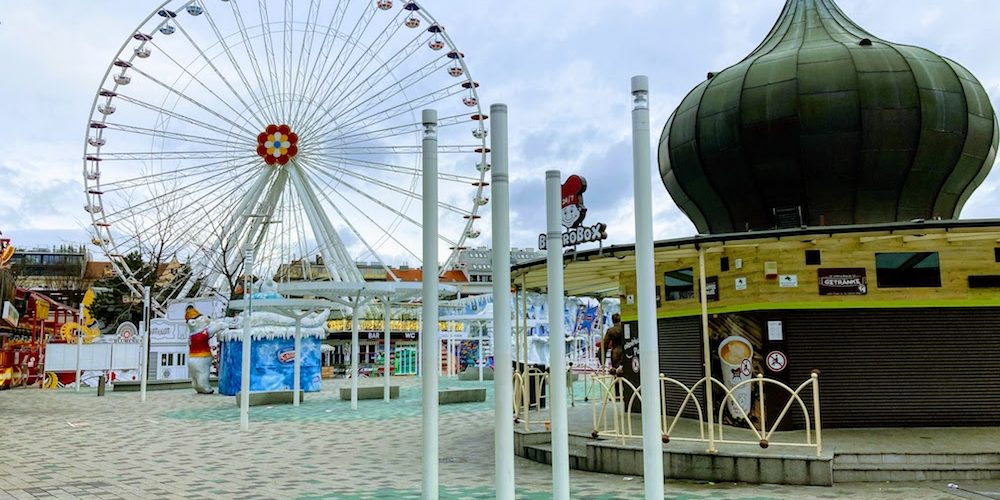 It was an early January morning in Vienna. On the U Bahn, people seemed to rediscover their well-known measured silence and routine gestures with fresh optimism. The beginning of the year had apparently seeped into the morning pattern of the Viennese commuters. To be fair, there was a warm spring wind blowing outside and the grey skies held the promise of sunshine and blue horizons. As U Bahn line 2 made its way through the suburbs from Seestadt into the city, I spotted fields of dark, damp earth ready to burst with new life and trees trembling with impatience to reveal their first buds. I smiled and decided spur of the moment to make a coffee detour before work. Supposedly, there was a cool new coffee place in the middle of the Prater which I’d been keen to try out.

Making my way through the Praterstern station I was once again astounded by the fresh silence of the unhurried Viennese routine. It was as if, with the luscious Christmas decor and errands gone, a veil had been lifted to reveal the basic cadence of the Viennese lifestyle. While I remembered the many reasons I love Vienna in January, I walked out of the station into the open air and crossed the road towards the Riesenradplatz.

I was literally the only soul wandering through the closed down Wurstelprater at 9 AM on a Tuesday and being in the Prater in January felt surreal. I navigated through the alleys bordered by nonfunctioning amusement rides and their advertisements, closed down treats vendors, and locked restaurants and could not help feeling as if I had landed in a parallel universe. My mind could vividly recreate the hustle and bustle that’s so typical of the place, while now I could hear the cadence of my own steps and the gentle whispers of the uncharacteristically warm wind. I lost track of time and could not remember if I had been walking for a minute or 10 or half an hour. At some point, I came across two men who seemed busy at work in front of an entrance and I inferred by the look they gave me they were as surprised to see me as I was to be there. We greeted God in traditional Viennese fashion and I walked on, by now wondering what the heck I was doing there anyway.

When Google Maps took me through a narrow alley that I was sure was a dead end, I almost cursed out loud convinced that this was a bad idea. Thankfully, it was possible to turn right at the end of the alley and, as I did so, I came along the windows of the Ponykarussell and then finally to its entrance. Vienna’s oldest pony carousel (older than the Giant Ferris Wheel!) has been completely remodeled and repurposed to house a unique coffee house that also runs a small shop of Viennese treats.

The view from the outside was of restrained elegance but inside I was immediately enwrapped in a warm, cozy atmosphere. Bright colors and ambient tropical background noise made me feel as if I had stepped into yet another parallel universe and by now I began to understand better what Alice in Wonderland is all about.

I tried to decide which of the seats to pick, as there was only one other customer inside, reading a book at one of the center tables. The choice consumed me for a split second until I unhappily realized that I was running quite late. Frankly, the thought of having to navigate through the labyrinth of alleys outside spooked me out a bit. I spontaneously decided on the only drink that seemed appropriate in that situation: a kurkuma latte to go.

As I thanked the nice waiter, I wondered briefly how the whole scene of a confused stranger walking in, snapping a few photos, and ordering a drink to go might have looked to him. However, I was determined to find my way back in time, which didn’t leave much room for those thoughts. When I walked back out into the silent morning, I realized I only needed to walk through a short alley straight ahead to make my way to the Prater Hauptallee, an easy and painless way to return to Praterstern. I sincerely thanked Google Maps in my mind for the supposedly faster earlier walk through the Prater in January and took to strolling on the renowned main alley while noticing the same restrained optimism and aloof freshness in the pace of the Viennese jogging or walking along.

I sipped the best kurkuma latte I had had in ages and pondered that this morning’s walk had felt much like my experience getting accustomed to Vienna over the past 13 years. A city that at times felt like a strange, incomprehensible parallel universe had slowly revealed its many facets and colorful gems and had enwrapped me to the extent where I could detect its shifting moods and seasonal peculiarities.

I still held the empty cup to go in my hand as I reached Praterstern and I suddenly understood there was no other drink that would have been appropriate under the circumstances. Like Vienna, the kurkuma latte was an acquired taste, and only the few who decided to savor it could appreciate its nuances.

Note: Please note that this is not a sponsored post and it does not constitute an advertisement. The author has no material gains from mentioning places of commerce that she visited as a regular paying customer and which do not have prior notice of being mentioned in this article.